A History of the Piano


The piano is one of the most historic instruments of all time. This paper will explain: what a piano is, the invention of the piano, what the piano did to the world, and how the piano became widespread. Although the piano could be an upright or a grand, this paper clarifies the history of all pianos. What is a piano? 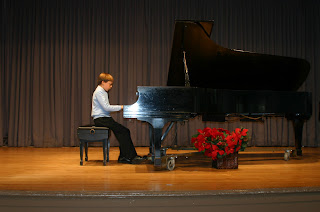 The piano is a keyboard/string musical instrument that produces both loud and soft (quiet) sounds. It was originally called Pianoforte which means loud/soft. The piano has two main parts, the keyboard, and the case. The parts inside the case are the frame, soundboard, the pedal mechanism, strings, the action, and bridge. The frame supports the stress made from the strings tension and is usually made from cast iron. The frame is often called the harp. The soundboard is made of wood and it amplifies the sound from the vibrating strings. The strings are made of wire in varying lengths to make different sounds. The bridge raises the strings so they don’t touch the soundboard. The action is made up of keys, hammers, and the levers that activate the hammers when the keys are played. The pedals modify the sounds of the string. When someone presses a key on the piano, it moves a hammer. When the hammer is moved it hits a string. The string will vibrate and the soundboard will vibrate in resonance. The sound gets amplified and the music is heard. How did the piano come to be?

The piano was invented a little bit before the 1700’s.  It is unsure exactly when the first piano was built because many cultures made some during all of the classical period. Cristofori was the most credited for the making though. The Italians made the piano around the 1700’s and were considered pioneers.  The major countries that made the piano were mostly in Europe. The countries are Austria, Germany, and Italy. Pianoforte was an Italian music term. The piano was a great improvement in musical technology.

During the classical period, composers wrote preludes and fugues on the piano. They sounded much better, but since the piano had better dynamic quality, different pieces were made. These pieces only sounded good on the piano, such as sontinas and sonatas. There was one composer named Bach who in a way influenced composers to learn and compose piano music. Bach was considered the father of the keyboard since he influenced many other composers to play the harpsichord and clavichord. Bach was still famous and influenced classical composers, such as Mozart, Beethoven, and Czerny. The piano showed the harmony, elegancy, beauty, and magnificence of music.  One of Bach’s famous quotes was “There is nothing remarkable about it. All one has to do is hit the right keys at the right time and the instrument plays itself.” This simple code tells exactly how the piano should be played. Many musicians, music teachers, and students love to play Bach pieces on the piano not only because it is graceful but also because it is methodical and gets gradually difficult. The piano soon became very popular.

The piano was very common in the romantic era which is from 1825-1900. Many works were written for the piano or otherwise able to be played on the piano. The piano was used in almost all the concerts. Many composers and wealthy families started owning piano. Composers wrote especially for the sound of the piano. Frederic Chopin was one of these people. Frederic Chopin wrote many Nocturnes and other pieces. By the 20th Century the electronic piano was invented. This evolution to the piano influenced many pop musicians. The pianos were sold to all the countries in the world and became very well spread. Pianos are very exquisite instruments.

The piano has one of the most intriguing histories in music. It has played an influential role in history and now. It produced beautiful sounds and harmonic melodies. People love how it coordinates your mind and muscles so you play the right notes at the right time. The piano has played a great part in today’s society.