Today I played with my friend who is visiting family in Dong Si Beijing. We go to school together. He also came to China to visit his grandparents. I had a very fun time playing with him. He lives very far away so my Mom and I had to take the Chinese Subway to get there. There were ten train stops between my house and his house. We also transferred trains once. After we got there, he showed me a few magic tricks using cards. The magic tricks he showed me were all about cards disappearing. Later, we played a game called Mushroom War on the iPad. We were just about to win when the iPad ran out of batteries. We both felt disappointed and glum. Then we went out to eat.

While we waited for our table and food, my friend and I played Egyptian Slap. In Egyptian Slap you try to get all the cards by slapping them. I can’t believe I epically FAIL every single time whenever I play it!

After lunch, we went to a dinosaur exhibition in Jing Shan Park. We saw many dinosaurs we never even heard of in the States. Some of the plastic ones moved and screamed. The dinosaurs that moved and screamed were powered from an electronic timer inside a power box. The electricity boxes looked like lunch boxes.

The highlight of this play date was when we went to a lake nearby and rented a pedal-boat. 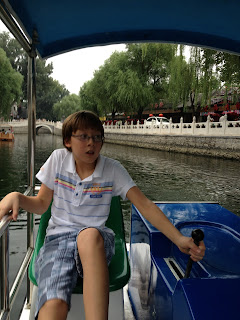 The lake was bean shaped with a beautiful white stone bridge. We could see many fish. Surrounding the lake were willow trees. It was drizzling lightly and it was a beautiful view. I felt peaceful and happy. While my friend and I powered and steered the boat, my mom and his aunt were talking. Sadly, our time was up and we had to say good bye.
Posted by rip at 1:50 PM