Last week, May 20 to May 23, I went to Santa Catalina Island for a school field trip. It was an overnight, four day field trip. Santa Catalina Island is twenty-six miles off the coast of Long Beach, California. We took a plane, a bus, and a boat to get there. We snorkeled, hiked, and kayaked. I had a blast! There were eight kids per "cabin" (they were similar to tents). 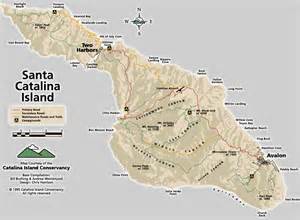 The cabin had small bunk beds and had a bumpy wooden floor that was covered in sand. There was also no light in the cabin. There wasn't even candlelight. We had to use flashlights and it was annoying because it caused us to have one hand full all the time. The cabins were diagonally placed and my cabin was situated closest to the beach so we could hear the crashing waves at night. We ate food at the food court. It was located right next to the beach where you can find tiny little sand crabs.We could take two minute showers everyday or we could not take a shower one day and take a four minute shower the next day etc. This is because of water conservation. 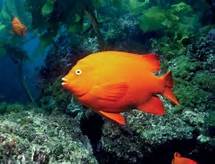 Snorkeling was very fun. On the first full day, I went down to the Waterfront, or Snorkel Shack, as I call it, to get my wetsuit and snorkel gear. Normally, when you go snorkeling, you don't need to wear a wetsuit. However, at Catalina Island, the water is quite cold and to stay warm for a long period of time, we had to wear extra thick wetsuits.In addition to keeping us warm, they acted as a personal floation device. It took ages to put on the blubber like wetsuits, but it was worth it. The wetsuits were 2-piece, so we had lots of trouble because the suit was extremely tight when it is dry. After putting on the blubbery suits, we had to put the snorkeling masks on. We washed them and then put them on. Shortly after, we waddled like penguins to the edge of the water. Then we back waddled into the ocean. As I looked down immediately after I got into the water, I couldn't see anything. Our counselor explained that there was too much sand near the beach so we swam farther out. Then we came across a kelp forest. 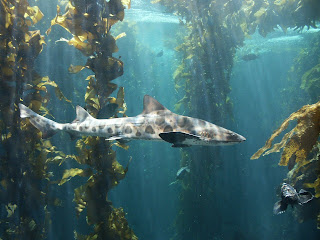 The kelp forest was vibrant with life and many fish were seen. First, we saw a huge school of Blacksmith fish. Then, we saw Garibaldi fish. They were eating parasites off the Giant Kelp. Giant Kelp can grow up to two metres a day! I thought that was amazing! The Garibaldis paid us no attention as we glided by. Then, out of nowhere, a Ray leaped from the sand causing us to stare in awe. Then, I looked to my left, and a piece of kelp glided towards me. However it was moving at an unnatural speed. As I looked closely, I realized it was an octopus! I looked around to signal my friends, but as soon as I looked back, it vanished. Darn it! I looked down to the sand and saw a leopard shark sweep across, scattering many fish in all directions. Then there was a bubble and as I looked to my right, I saw a harbor seal swim by. As I got out of the water, I was shocked by how much life was underwater.

I was exhausted after being in the water for a full day but I was looking forward to the next day!
Posted by rip at 12:44 PM