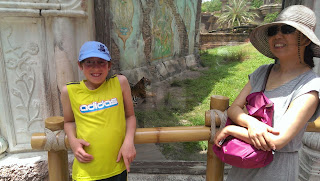 The first day we were at the Walt Disney World Resort, we went to the Animal Kingdom and the Blizzard Beach Water Park. At the Animal Kingdom, we saw Asian tigers and monkeys. The Asians tigers were sleeping but seemed very majestic. The monkeys were funny. I saw them swing from rope to rope (they were on an island with no trees). They also went hoo hoo hahaa just like in the cartoons.

I also went on a water ride at the animal kingdom. However I didn't get as wet as I wanted to,so I was disappointed. It was an eighty minute wait and I was really looking forward to getting wet. I got in the raft with my dad and six others, and it started to go up a ramp. Tinktinktinktintktink splash! We landed in the water. Then we spun in circles downward and went back up another ramp. Finally, a steep drop. I hung on as we tumbled into the water, Splash! My shirt got wet. Then elephant statues squirted water at us. Eventually, we went around a turn and got off.

Then, I went on one of Walt Disney's new rides, Yeti Mountain. On the ad, it said that you were on a runaway train in the Himalayas. I was very excited however, the wait was two hours long. We got on the "train" and pulled the safety bars down. Then, the "train" started to move. As we started to go up, I gripped the safety bar very tightly because I am a tiny bit afraid of heights. Then we reached the top. I looked around but there was no drop. Next, we went into a dark and spooky cave. Eventually, we saw light in front of us. It was a dead end. The tracks were mangled and broken. We stopped moving. I thought the ride was broken and my heart started pounding faster. Then, we started going backwards at full speed. We all raised our hands and screamed. The sound of the wind whizzing past my ears sounded like a sonic boom. VOOOOOOOOO.  I retracted my arms from the sky, and held on for dear life. Everyone else did the same. WUBWUBWUB. We suddenly stopped. I went, "Oof" as my back hit the seat-back.

Suddenly, there were squeaking noises, and we saw the shadow of the Yeti tearing up fake tracks. At first it terrified me. Then, the drop we were waiting for, happened. As we were turning, there was a creak, and then a whoosh, as the train free-fell at an eighty degree angle. Then, we pulled up and did a couple of twirls. Eventually it slowed down dramatically. We came to a stop and had to get off. I jumped off and took my fast pass out. I said, "Lets go again!" 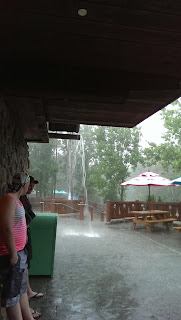 I went to the Water Park on the same day. However, I couldn't go on any of the slides because of a thunder storm. It was pouring so badly that I saw a guy's umbrella collapse under the rain. The wind is howling. Fwoosh. The wind blew in our ears. People were scrambling to get inside. Then CRABAM lightning and thunder joined the rain and caused more panic. My family and I quickly went back to our resort and dried off. Wow! What a day!
Posted by rip at 2:27 PM