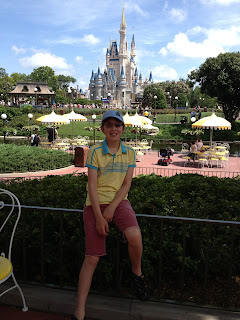 The second day at the Walt Disney World Resort, I went to the Magic Kingdom. It looks EXACTLY like Disney Land in California. The Magic Kingdom is split up into "Lands". The Magic Kingdom includes Tomorrowland (my favorite), Frontierland (my second favorite), Adventureland, Fantasyland, and Main Street. Main Street has a plentiful amount of shops and Fantasyland has a bunch of Princess related stuff. Adventureland theme is more Tarzan or Pirates of the Caribbean style. Frontierland's theme is centered around the Wild West. Tomorrowland's theme is "more future and Buzz Light Year" themed.

Tomorrowland  and Frontierland have the most rides of the "Lands". I enjoyed Tomorrowland's rides better because they are more intense and wild than Frontierland's rides. Tomorrowland has two rides that I really enjoyed. They are Space Mountain and a Go Cart Track. My dad and I went on Space Mountain twice! However, the first time was more exciting because I didn't know what to expect. The second time was more predictable. We got into the roller coaster and it slid into a long tube. Blue Lights started flashing and I couldn't even see my hands in front of me. BLECH! I don't like those effects because it is very bright but you still can't see. There was a whirring noise that steadily grew louder and louder. Click. We shot off on to the main track. There were cool lights and stars that shined everywhere. You could even see a galaxy. The ride was short considering the two hour wait. Then, we went to Frontierland.

At Frontierland, We went on Splash Mountain and Big Thunder Mining Co. Express. Splash Mountain is based on the a Disney Movie, "The Song of the South" and it has lots of drops. We climbed up a very steep hill for about three minutes then stopped. I looked down and saw a Briar Patch. I raised my hands and shouted, "AHHHHHHHH!!" The boat was free-falling like a skydiver jumping off a plane. It was a thrill, I mean the BIG THRILL. Big Thunder Mining Co. Express went supper fast and had many sudden turns. We climbed up a mineshaft  Chugchugchugchug. Creak. Veeeeeeeeew. We raised our hands up in the air again! It went so fast my eyes started to water. It was exhilarating!

After Frontierland, it was getting dark and there was a Light Parade and fireworks at Main Street.   We saw lots and lots of Disney Characters who were on floats that were covered with lights. We saw a bunch of princesses, Peter Pan, Mickey and Minnie Mouse and more! The fireworks were beautiful and spectacular. It lit up the entire sky. They looked so close as you could touch them!! After the Parade I went back to Tomorrowland to go on the Go Cart Track. It was about one o'clock in the morning when we got back to the hotel. I was exhausted but had a blast.

The third day at the Walt Disney World Resort, I went to Disney's Hollywood Studios. There is only one ride that I thought was intriguing. It is Midway Mania. It is a 3D shooting game based on Toy Story. You get 3D glasses and get to shoot little targets on a screen. It was super exciting. Compared to the other parks, Hollywood Studios is quite small. It was extremely hot. That day we decided to go back to the hotel earlier than normal and rest.
Posted by rip at 10:46 AM