On July 4th, I went to my friend Nicholas's and Max's house, along with some other friends, George and Will, after watching a long parade. We have known each other for very many years. There house is right next to a boat marina. As a tradition, Nicholas's and Max's parents always host a 4th of July party. The parade seemed longer than it used to be. Perhaps it was longer, or I have just watched it too many times that it just got boring. However, we had a blast. We played "Hunger Games", went swimming, and set off fire works.

As Nicholas, Max, George, Will, and I were waiting for our other friends, Sophie, Jack, and Samantha, we played "Hunger Games". "Hunger Games" is a game that uses foam swords, water bottles, and plastic baggies with edamames in them. Someone would shout "go" and we would run to the center to get our weapons and food, and would run off. You could ally with someone instead being on your own, so I allied with Nick. We were against Max, William, and George. George didn't want to ally with anyone but Max and William allied. George shouted go and we rushed to the center. I grabbed a bag of edamames, a Seltzer bottle, and a foam sword. I sprinted away and was followed by Nicholas who had the same things I did except for the edamames. We ran towards the parking lot and camped there. Then we heard George's voice and ran outside. We took our swords and attacked George in the court yard. We yelled as Nick bashed George with the hilt of his sword and I slashed him in the back. George "died" and became a message bird. We told him to find Max and Will to meet us at the courtyard. Of course, we weren't going to stay. It was a trick that would buy us time so we could come up with a strategy. We used the hilt of the blade to unlock the docks and went in. However, Max and Will saw us. They came after us but couldn't get through the gate. I went behind them using a different gate and we had a duel. Will and I hacked and slashed but attacks were always parried. Then I blocked and hit Will directly in the back causing him to be badly "injured". We ran away leaving Max to tend to Will's "wounds". We spied on them and we attacked them one-on-one again. I defeated Will and Max quit the game. :( . Finally Sophie arrived and we all decided to go to the pool. Nicholas brought water guns too!

At the pool, we had a chicken fight. A chicken fight is when you get on somebody else's shoulders to make a "chicken". Then you would fight other "chickens". I got on Nicholas shoulders and we attacked Max and Sophie. I filled my water gun and squirted both Max and Sophie at the same time. Max had to let go and 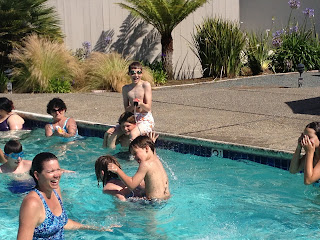 wipe his eyes, so he fell off Sophie's shoulders. Hurrah! Jack and Samantha came and Jack teamed up with George. Then Nicholas and I attacked Jack and George. We tried the same tactics but they had goggles on. Nicholas and I decided to charge. Bam! We suddenly were under water. I swam back to the surface and saw Sophie and Max laughing. I got back on Nicholas's shoulders and we charged both of them at once. I gave Nicholas the water gun and he squirted Max and Sophie as I tried to shove Jack off of George. We are victorious! Then we go Bubble Bubble Bubble as they pull as down even thought they didn't reform their chickens. We decided to go back inside and have dinner while watching Chowder.

After dinner, we rested, talked, and had a pillow fight. Then it got dark and George, Will, and Sophie had to leave. We went to Jack and Samantha's Dad's office's parking lot to set off fire works! There was a total of three boxes of fire works, from Purple Rain to the Hot Devil to the Stegosaurus to the Titanic. We each chose fireworks and took turns setting them off using a blowtorch! They were bright and noisy. We also did a few together.

Everybody helped with the grand finale. There were thirty lightning flashes, ten flashing fountains, and five bright eyes. My dad took the blowtorch and knelt down on the ground. He lit all of them at once and walked away. Nothing happened at first but then there was a huge light and a bunch of blue flames and orange sparkles flying everywhere. In the center were the lightning flashes which were like a white aura. Then it was dark again. It lasted about two minutes. It was truly spectacular.

Sadly, Everyone had to go home so we say good bye. I am looking forward to next year!!!
Posted by rip at 10:11 AM