Out in the Ocean

The boat is swaying back and forth and the whitecaps behind us are churning. They make the sound of a fan spinning wildly. The ocean smells like dried seaweed and salt. I am already wearing my swim trunks. I grab my flippers, snorkeling mask, and life jacket and wait for my mom and dad. We are ten miles off the coast of Key Largo, Florida. The water is light green like an emerald, compared to dark green Pacific Ocean. The Atlantic Ocean’s water color is lighter because its salt content is less than the Pacific Ocean. The Pacific Ocean looks like twin sisters with the Atlantic Ocean, but with a shadow thrown upon it. 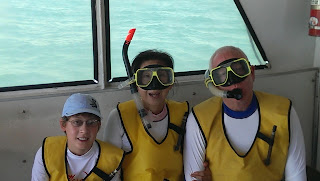 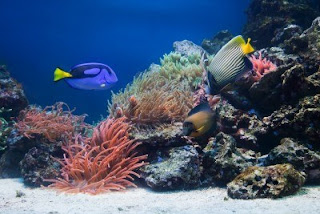 Splash! I already get water in my mask and take it off. I am surprised by how warm the water is. I put my blue mask back on and gasp in shock. I saw an underwater metropolis! Fish of all shapes and sizes were swimming in schools and solo. I saw a blue and black fish that looked suspiciously like Dory from “Finding Nemo”.  I was very careful and it was incredibly hard to maneuver because the captain told us that it was against the law to accidentally or purposely kick the coral or to have any contact with the fish or plants. My legs are bunched up and I use my arms to swim. I see a colorful snail and instantly recognize it as a Chuck Norris Snail. Yes, it is indeed called the Chuck Norris Snail. I saw one when I was snorkeling at Santa Catalina Island. The look and name are stuck in my head because it was awesome. It has a strange name and looked unique. It looks like a tiny alien snail which has a mix of colors on its shell. I continue to swim and come across a huge valley, where no fish roam. I get a tiny bit nervous because of the lack of fish. I feel like there might be a shark that scared all the fish away. I continue to use my arms to swim until I reach the imaginary boundaries which the captain set for us. Suddenly, I see a fish swim right below me and I swing onto my back. I manage to muffle an AH. I hear the horn blow two times. That is the signal for us to swim back. 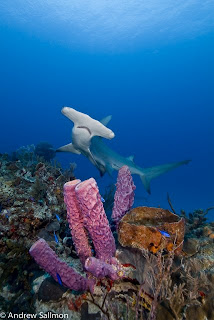 After ten minutes, we arrive at our second destination. We drop back into the water. It is a bit deeper and I can maneuver much better. I see a mysterious marble hand poking over a hill. I kick towards it and it is a Statue of Christ. A wealthy Italian business man dropped the statue there to honor the sea. I see words written on the bottom of the statue but underwater with no glasses, it is like Lorem Ipsum to me. I was a tiny bit disappointed. We saw scuba divers below us. I look at the statue for a while and continue to snorkel. I try and scream as I see a Hammerhead Shark fin, near a hill. I cautiously swim past that area and see that the shark means no harm. It just wants to be cleaned by the smaller fish that eat the pests off the shark’s skin. I learned in a documentary that hammerhead sharks didn't harm humans very much and went to coral reefs to clean mostly. I climb back into the boat to rest…

The underwater world was awesome and colorful. I gained so much knowledge just by looking and inferring real life. Fish like to eat algae on coral and they did. The fish defend their food and they did. I saw that the food chain was very important for the fish to survive. I deeply understand the things I learned in school, during field trips, and in lectures about the underwater universe. I was amazed because the fish created an underwater community where they all thrived and were happy. I also made a decision to take scuba diving lessons because I love the deep sea.
Posted by rip at 12:58 PM 1 comment:

On the way to Key Largo, we stopped off at Kennedy Space Center. It is a museum/rocket building/launching center. It was EXTREMELY AWESOME. We saw lots of the original space crafts and I even got to touch a moon rock! We parked in the gravelly parking lot and trudged in the

heat to the air conditioned buildings. NO! We have to wait in line outside for the tickets. At least is was under the shade. Hurrah, we get to go inside. We go through the security station and walk into the building. We walk out the other side and I gasp. Whoa. Five space ships, original and models. All were standing proud and tall in what was the Spaceship Garden. It was incredible.

First, we walked around the "garden" then we moved on to the bus tours. We took a few pictures and got on the bus. We watched documentaries and videos of lift offs. We stopped a couple of times to see manatees and alligators in the tiny river on the side of the road. One alligator was even crossing the road! I had a blast.

As we got off the bus, we went into a waiting room. They had pictures of explorers and little film clips. There was even a clip from the original Star Trek! Then, we went in a Launch Room. The Launch Room we were in was the actual launch room where they directed the first people to go to the moon on Saturn V. The lights turned down and voices were on speakers. Launch in 10, 9, 8, 7, 6, 5, 4, 3, 2, 1, Thrust Engaged... and we have LIFT OFF!!! The windows turned red and the room shook. It was simulating what happened when Saturn V launched. 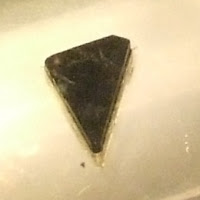 Finally, we went to the last room ,which turned out to be huge. It had original space ships and models. They had the Saturn V which took up more than three quarters off the room! They had a moon rock that you could touch! In a tiny little room off to the side, they had astronaut suits and Lunar Samples in cases. It was exciting! After we saw everything, we decided to leave and continue to Key Largo.

The Kennedy Space Center was unbelievably cool.
Posted by rip at 1:09 PM No comments:

From Disney World to Key Largo

After four days of riding roller coasters at Disney World, My Mom, Dad, and I drove to Miami to stay for the night. I missed Disney World, but I was sure that I was going to have a blast at Miami. I was wrong. It ended up being a boring place that had a beach with white sand. What was so special about that? The streets were crowded, the lights were bright, and it was plain noisy. I didn't like it at all. I was glad to go back to the hotel at Miami, where I could huddle around my iPad and play. I forget about all the boring things for the rest the night. Then, I placed my iPad on the nightstand, and fell asleep.

Then, we continued to Key Largo. The journey to Key Largo was exciting. My parents told me that Key Largo was much more fun than Miami. They were right! Even the road trip to Key Largo was fun. We saw lots of boats and the Atlantic Ocean was very calm. Once we entered Key Largo, we saw many palm trees. I wondered if Hawaii was like Key Largo. We drove by a boat storage place. There were boats of all sizes that were placed high and low. It was cool. Then, we drove by tons of Wendy's (eventually, we started eating Wendy's there because it was convenient). We went to the hotel and it was tropical like. There were separate little one room cottages where peopled stayed instead of one giant sky scraper (there were no skyscrapers in Key Largo or any of the Keys).

There are kayaks and peddle-boats at the resort. The day we got to Key Largo we got in white kayaks that were very wobbly. I was wearing a black and orange swimsuit. I also had a black and white paddle. I strapped on a orange life jacket that went over my white shirt. KASPLOOSH, KASPLOOSH. The kayaks were wobbly but fun to use. It was getting dark so we went back inside and grabbed a game of Sorry for us to play. Sorry went on forever, so we decided to stop. It was another awesome day in Florida!
Posted by rip at 3:06 PM No comments: