A few weeks ago, I went to the Sacramento River Delta with my friends Jack and Samantha. Their dad's company rented a house right by the water. The water was green and smelled like the breeze we get in the San Francisco Bay Area. I thought the water would be clearer, but it was so murky I couldn't even see my own hand in front of my face when I was underwater. After I got into the refreshing air-conditioned house, I threw on my swim trunks and splashed on my sun screen. I pulled on my white shirt and jumped into the hot tub with my friends. SPLASH!

The next day, we went fishing on the dock. I caught a fish and we named him Ralph. Jack's fish was named George. Samantha's fish was named Sasquatch. It was exciting to catch the fish after waiting for so long doing absolutely nothing. Later, we ate the fish for supper. To me, the fish had no taste, but everyone else said it tasted delicious. Fishing was annoying because I needed enormous amounts of patience. We tried everything to get the pesky fish onto the line. We used worms, chicken fat, then bread. It turns out the fish somehow knew the bait was on a hook. 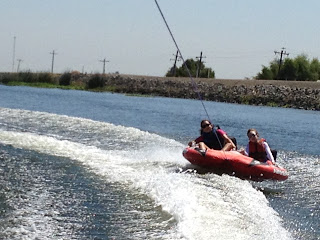 The last day, we went boating! We loaded a big red inner tube that could hold two people onto their dad's boat. My mom rubbed sunscreen all over my face. I scowled because I despise the feeling of sunscreen. Then, I snatched my towel and rushed down to the boat. I sat in the front and waited for the adults to get on board. Samantha and I were the first to get on the inner tube. I carefully slid into a very tiny hole where you are meant to sit. My knees were bent, and I held on tightly to the handles. The boat went slowly at first. I told Samantha that it wasn't very bad but then it instantly went super duper fast! We swerved left and right, creating beautiful trails of white water behind us. The fresh air was blowing in my face and I thought that I was flying. I raised my hands in the air but quickly brought them down again. Sometimes we bounced over waves and we went soaring like birds. As we landed, our backs slammed onto the seat, and our heads would shake back and forth. I held on for dear life. By the end of our turn, my head was shaking and I was debating whether or not to go again. After a couple of turns, we went back to get the Unidentified Floating Object, AKA the UFO. 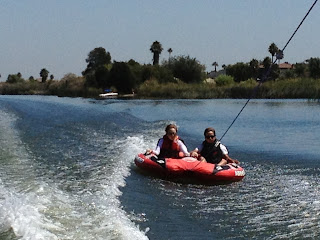 All three of us laid on the UFO. Jack and I were on the edges and Samantha was in the middle. We went much slower, but laying down it seemed the same speed as when we were on the first inner tube. In fear of rolling off, I clung onto the handles until my hands turned white. Apparently, everyone was doing the same thing. We screamed as we went into the air and landed with a thud. Our legs shook like a seal's flippers and slid off the UFO a bit with every bump we encountered. Eventually, we hit the water so hard Jack flew over the protection guards, and tumbled into the water. However, he was still hanging onto the UFO, and it was very amusing to watch. 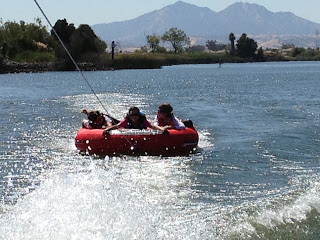 After Jack got back onto the bulbous UFO, we went zooming. We pretended that we were on the Millennium Falcon from Star Wars. It felt like we were going at warp speed. We made a joke that if we went any faster, we would open a portal into the second dimension. Then, everyone would be circles and stick figures. We probably wouldn't be able to see each other and it would be a disaster. Luckily, we did not go tubing into another dimension. Instead, Samantha bumped me off the UFO, and I face planted, then got run over by the UFO. It was painful. My hands were sore and it was very difficult to get back on the UFO. My arms and hands were tired from holding on for so long. Despite the fact that the entry was painful, it was very refreshing to get into the cold water on a hot day.

We went a little farther, but then we all leaned forward and the UFO deflated. Jack and Samantha fell into the water. In my desperate attempt to rescue them, the UFO collapsed under me. I was slowly getting submerged in the water. We all laughed out loud. SPLASH!

Sadly, I had to leave. I packed my stuff and said farewell to my friends. I hope to go again next year!
Posted by rip at 12:37 PM