Continuing the theme of Doctor Who, I would like to introduce my: favorite alien, nicest alien, scariest alien, coolest alien, and why that is my opinion. 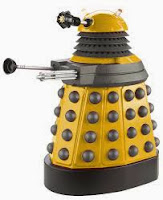 My most favorite alien is the Dalek. The Daleks are mutant Kaleds which came from the planet Skaro. They believe that they are the most supreme race in the universe. They want to kill everybody else and are the Doctor's greatest enemies. They cry, "EX-TER-MINATE," when they want to kill something. I wonder what it would sound like in a war. It must sound like a bunch of "EX-TER-MINATE" overlapping. No wonder everyone is scared of them. They fought the Time Lords in the Great Time Wars and both species were almost completely obliterated. The Daleks are octopus like creatures and are in shells that resemble salt and pepper shakers. They have an telescope that lets them see. They also have a machine that looks like a toilet plunger that can scramble codes and do other miscellaneous things. Their weapon looks like a whisker that is shoots laser beams. They are my favorite because they seem very mischievous and mildly cute.

I think the scariest alien in Doctor Who is the Weeping Angel, which also fits in the category of the nicest alien. When they are being observed, they cease to exist. They turn into stone until they are no longer observed. This defense mechanism makes them immune to weapons of all kind. When they are not seen, they travel at unnatural speeds. If they touch someone on the back of the neck, the victim is sent back in time to live out their life. I cannot put a picture in this blog post because an image of a Weeping Angel is a Weeping Angel. It will hop out of your computer screen and gobble you up. They are the scariest alien because they look extremely terrifying. They are also the nicest alien because they don't gruesomely maim you until you die. So if you see a Weeping Angel, don't turn your back, don't look away, and DON'T BLINK. 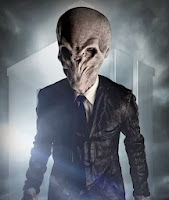 I think the coolest alien in Doctor Who is the Silents. They are professional priests of the Papal Mainframe. The Papal Mainframe is a spaceship church that has security to keep you safe in this world and the next. When you see the Silents, you can remember them, but when you look away you can't. In the episode: The Impossible Astronaut they are first introduced and are referred to throughout season 6. In season 6, Madame Kovarian gathers renegade people from the Papal Mainframe including some renegade Silents to try and kill the Doctor leading to the statement, Silence will fall. in The Time of the Doctor, normal Silents help the Doctor fight the Daleks. They are good aliens and bad aliens. I think they are the coolest because they can absorb energy and shoot it from their hands. They can also use post-hypnotic suggestion to control people. They are around seven feet tall with bulbous heads and they wear black twentieth century suits and ties.