My Trip to Washington D.C (Day 2): The Thirst

On Monday, we went to the Embassy of Israel, Arlington National Cemetery, took a photo op outside the White House, and went to some memorials.

The Embassy of Israel was interesting, but wasn't the most exciting. We learned a bunch about Israel's politics and government, but there wasn't any moving around and exploring things. It was a sit down and listen to a speaker for an hour activity. Then, we went to Arlington National Cemetery, which we were all very excited to see.

Everybody was wearing formal clothes, so it looked like we were going to a funeral, but we were actually fantaisie touristes (french for fancy tourists). We walked up the hill, which was surprisingly steep, despite it looking flat from far away. We marched on and on for half an hour, and finally arrived at the Changing of the Guard Ceremony. It was very calm, and the Guards marched back and forth for about ten minutes, and everybody was sweating. Some people looked like they were going to faint from the 80-90 degree weather, sitting on rock steps in dry air. Finally, something happened.

A guard and a sergeant walked out from who knows where, and the sergeant announced in a hoarse, loud, and scary voice. "MAY I HAVE YOUR ATTENTION! WHAT YOU ARE ABOUT TO WITNESS IS THE CHANGING OF THE GUARD CEREMONY. PLEASE REMAIN SILENT. PHOTOGRAPHY IS ALLOWED. THANK YOU FOR YOUR COOPERATION!" Then, he walked over to the guard, spun a working, cocked, loaded, rifle a few times, handed it to the guard, then they started marching over to the strip where the original guard was still marching back and forth. I swear it was like they were trying to send subliminal messages to our brain. "21... 21... 21..." The guard marched twenty-one steps, stopped for twenty-one seconds, rearranged his gun, waited for twenty-one seconds, faced the other direction, waited twenty-one seconds, and marched twenty-one steps. Just looking at the twenty-ones make me want to say twenty-one  ¯\_(ツ)_/¯.  After that, we were all extremely thirsty, and we rushed to the water fountains as if we were in a desert for two and a half days and saw water for the first time. We scrambled there, and sucked up the water like we would never see it again. We spent fifteen minutes there.

After we drank our water, we walked to President J.F.K's grave, and it was very exciting, seeing a praised president's tomb. We paid our respects and moved on. By then, we were all thirsty again, running back to the visitors center. When we finally got there, we saw a water fountain. We raced there, but it turned out that it didn't work, forcing us to look for another one. We found the only other ones in the visitors center, and the line nearly filled an entire hallway.

We spent thirty minutes getting our precious water, and left to go to the memorials. In the bus, I reflected on Arlington National Cemetery, and realized that we would not have had our country as it is today without them. I paid my respects to EVERYONE buried in that cemetery. Thank You.

We took a photo op outside the White House, but we didn't see Obama, so it wasn't as exciting as it could have been. There were two guards on every side, and there were two fences on every side. It also looks smaller than in pictures. Then, we went to the memorials.

First, we went to the Jefferson Memorial, which was pretty cool, 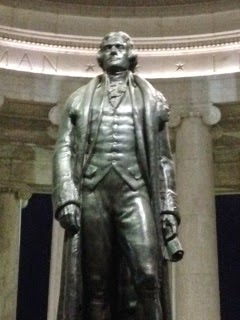 but not the most exciting thing in the world. Then, we went to the FDR memorials, which was awesome, because you were allowed to climb on rocks to get a better view of the lake beside it.

We didn't go too many places that day, but it was still awesome and exhilarating to see more land marks of Washington D.C.
Posted by rip at 9:03 AM